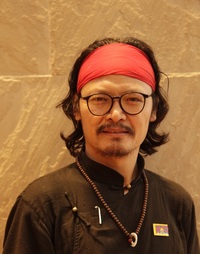 Tenzin Tsundue is a restless young Tibetan who, after graduating from Madras, South India, braved snowstorms and treacherous mountains, broke all rules and restrictions, crossed the Himalayas on foot and went into forbidden Tibet! The purpose? To see the situation of his occupied country and lend a hand to the freedom struggle. Arrested by China’s border police, and locked up in prison in Lhasa for three months, he was later ‘pushed back’ to India.

Born to a Tibetan refugee family who laboured on India’s border roads around Manali, North India, during the chaotic era of Tibetan refugee resettlement in the early seventies, Tenzin Tsundue is a writer-activist, a rare blend in the Tibetan community in exile. He published his first book of poems, Crossing the Border, in 1999 with money begged and borrowed from his classmates at Bombay University. In 2001 he won the ‘Outlook-Picador Award for Non-Fiction’. His second book, Kora, is already in its eighth edition, and his third title, Semshook, is in its third edition. This the third edition Tsen-GÖl, first published in March 2012.

Tsundue joined Friends of Tibet (India) in 1999 and campaigns among Indians to win support for Tibet. In January 2002, while Chinese Premier Zhu Rongji was addressing Indian business tycoons in Mumbai’s Oberoi Towers, Tsundue scaled scaffolding to the 14th floor to unfurl a Tibetan national flag and a FREE TIBET banner. In April 2005 he repeated a similar stunning one-man protest when Chinese Prime Minister Wen Jiabao was visiting Bangalore. Because of these daring protest actions, Tsundue is often detained and is under police surveillance whenever Chinese leaders visit India.

Tenzin Tsundue’s writings have been published in Indian newspapers and magazines and also in the international media. He is also anthologized in Asian and International literary journals.

As a poet, he represented Tibet in Sahitya Akademi’s Second South Asian Literary Conference in New Delhi in January 2005, during Poetry Africa in Durban, 2005, and at Jaipur Literature Festival 2010. Both as an activist and a writer, Tsundue fights tooth and nail for the freedom of his country and plays an important role in the Tibetan political struggle. His writings are also published online at FriendsofTibet.org/tenzin and TibetWrites.in/authors/tenzin-tsundue

Versions of Tsundue’s website are archived for history at WayBack Machine Internet Archive.

3 thoughts on “About the Author”

This site uses Akismet to reduce spam. Learn how your comment data is processed.

Tenzin Tsundue writes, speaks, and acts for a Free Tibet

I am travelling through the Himalayas, bringing information to its people about the Tibet connection.